GoldHaven CEO, Justin Canivet states "We are very pleased with the results of our 2022 exploration work. We have successfully identified new targets based on airborne geophysics which bring technical confidence and added scale to the targets we have identified on the ground. This is an exceptionally mineralized belt with road access and superb gold-silver-copper endowment. 2023 will be an exciting year for the company as we bring a spectrum of new porphyry, polymetallic, and structurally-controlled gold targets to the drill testing stage."

Smoke Mountain is strategically situated within the Central British Columbia Porphyry-Epithermal Belt; an extensive 85 kilometre polymetallic belt that is highly prospective for gold-silver-zinc epithermal systems, porphyry copper-gold deposits, as well as gold and silver-rich magmatic-hydrothermal occurrences (Figure 1). The region has the potential to host some of the largest copper-polymetallic discoveries in British Columbia.

Key outcomes from the 2022 Exploration Campaign include: 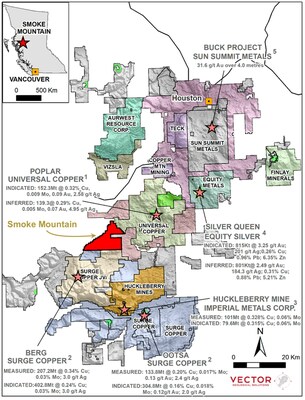 GoldHaven is currently building out a work program for 2023 that will focus on drill target delineation, and further expansion of grids and mapping areas to extend known anomalous areas as well as to identify additional target areas. One of the objectives for the company is to drill test some of the new target areas in Q3-Q4 of 2023. The work plan will include: 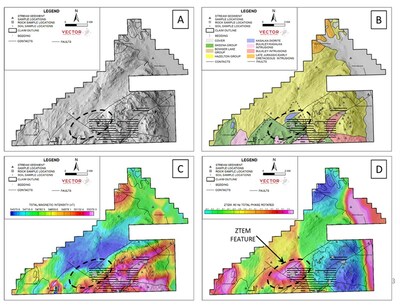 Exploration at the Smoke Mountain property during 2022 was conducted by Dahrouge Geological Consulting Ltd.  Field work was completed from June 22 to July 9, with a maximum of six crew members, and from September 3 to September 28, with a maximum of four crew members. Field personnel stayed in Houston with access to the property provided by Westland Helicopters from their Houston base.

In the south-central part of the property, soil sampling and geological mapping were completed in a grid pattern along east-west traverses (spaced 200m apart). Soil samples were collected at 50 meters stations. Soil sampling and geological mapping were also completed along curvilinear traverses on the prominent ridge extending southwest from Smoke Mountain and several preliminary airborne geophysical targets were investigated with soil sampling traverses (50 to 100m nominal sample spacings). In addition, helicopter-supported stream sediment sampling was completed across the property. Prospecting was incorporated into the geological mapping program and grab samples of altered and/or mineralized rocks were collected.

The 2022 field program at Smoke Mountain resulted in the collection of 1044 samples: 932 soil samples, 58 stream silt samples, 4 stream heavy mineral concentrate samples and 50 rock samples. An additional 86 quality assurance samples (field duplicates, certified reference materials, and quartz blanks) were inserted before shipment for an overall total of 1130 samples submitted for geochemical analysis. Sample preparation and fire assays – AA gold determinations of rock and HMC samples were performed at the Actlabs laboratory in Kamloops, BC. Aqua regia – ICP-MS multi-element analysis of all samples was performed at the Actlabs laboratory in Ancaster, Ontario. These geochemical results are expected in Q1, 2023.

A ZTEM airborne natural field electromagnetic survey was conducted by Geotech Ltd. during August 14-17, 2022. The ZTEM survey produced a 2 x 4-kilometre conductive feature that is considered prospective for porphyry mineralization and alteration. The ZTEM feature is coincident with a strong magnetic gradient (Figure 2C) in an area of high geological complexity (faults and intrusions; Figure 2B). The ZTEM feature will be the focus of additional geophysical and geological modelling to refine its size, shape and depth continuity with the objective of advancing it to a drill target.

The total area coverage was 168 square kilometres including 608-line kilometres, along 300m-spaced, NW-SE oriented flight lines and orthogonal NE-SW 3km-spaced tie-lines. The principal sensors included a Z-Axis Tipper electromagnetic (ZTEM) and magnetic system, consisting of a towed-bird ZTEM vertical dipole receiver coil and a cesium magnetometer, flown at an avg. height of 108m and 123m, respectively, as well as two fixed, orthogonal ZTEM compact receiver sensors and a second cesium magnetometer at the base station. ZTEM tipper data at six frequencies, from 30Hz to 720Hz, were collected and processed.

GoldHaven also contracted Eagle Mapping to conduct a Light Detection and Ranging "LiDAR" survey for the Smoke Mountain Land position (Figure 2A). Eagle Mapping provided aerial photography for the Smoke Mountain project. LiDAR data was collected at a minimum density of 10 ppm and the colour aerial photography was orthorectified to the LiDAR bare earth model to produce an orthophoto with a 15cm pixel resolution. Digital elevation model ("DEM"), a digital surface model (DSM), and contours were generated from the survey data.

GoldHaven's 8,461 hectare Smoke Mountain property is strategically situated within an extensive 85 kilometre polymetallic belt that is highly prospective for gold-silver-zinc epithermal systems, porphyry copper-gold deposits, as well as gold and silver-rich magmatic-hydrothermal occurrences. The property is road accessible from Houston via a series of gravel forest service roads off Highway 16.

Exploration activity in the area has been renewed in this historic mining region, propelled by  the ongoing expansion of advanced exploration projects and mines including:

The historic Central BC porphyry-epithermal belt is re-emerging as an important copper-gold-silver jurisdiction as evidenced by increased staking activity and exploration drilling. The region is quickly becoming known for its long mineralized drill intercepts including Universal Copper's 216m interval grading 0.54% CuEq (click here for release) and has the potential to host some of the largest copper-polymetallic discoveries in British Columbia.

These results in the immediate vicinity of GoldHaven's Smoke Mountain project showcase the exceptional regional endowment and metallogenic character of the Late Cretaceous arc rocks hosted within this belt. GoldHaven's exploration potential lies in the untested and under-explored alteration and mineralization trends, as well as newly identified geophysical targets.

Pursuant to the Company's news release dated September 8, 2022, whereby the Company reported the expansion of the Smoke Mountain Property, the Company may earn a 100% interest in the Smoke Mountain 5-7 claims pursuant to an option agreement dated September 8, 2022 (the "Option"). In consideration for the granting of the Option and to maintain the Option, GoldHaven shall, during the Option Period, issue to the Optionors an aggregate of $337,500 in GoldHaven Shares at a deemed price of $0.14 and make cash payments to the Optionors in the amount of $281,250 as follows:

Where the number of GoldHaven shares issuable shall be determined by dividing the $ amount by the Market Price at the date of issuance and in no instance shall it be less than $0.14. The Optionors retain a 2.5% NSR royalty (buyable down to 2%) and there are no work commitments on the property.

Daniel MacNeil, P.Geo, a Qualified Person as defined by National Instrument 43-101 Standards of Disclosure for Mineral Projects, has read and approved all technical and scientific information contained in this news release. Mr. MacNeil is Technical Advisor to GoldHaven Resources Corp.

On Behalf of the Board of Directors

Neither the CSE nor its Regulation Services Provider (as that term is defined in the policies of the CSE- Canadian Securities Exchange) accepts responsibility for the adequacy or accuracy of this release.

This news release contains forward-looking statements and forward-looking information (collectively, "forward looking statements") within the meaning of applicable Canadian and U.S. securities legislation, including the United States Private Securities Litigation Reform Act of 1995. All statements, other than statements of historical fact, included herein including, without limitation, the intended use of the proceeds received from the Offering, the possible acquisition of the Projects, the Company's expectation that it will be successful in enacting its business plans, and the anticipated business plans and timing of future activities of the Company, are forward-looking statements. Although the Company believes that such statements are reasonable, it can give no assurance that such expectations will prove to be correct. Forward-looking statements are typically identified by words such as: "believes", "will", "expects", "anticipates", "intends", "estimates", "plans", "may", "should", "potential", "scheduled", or variations of such words and phrases and similar expressions, which, by their nature, refer to future events or results that may, could, would, might or will occur or be taken or achieved. In making the forward-looking statements in this news release, the Company has applied several material assumptions, including without limitation, that investor interest will be sufficient to close the Offering, and the receipt of any necessary regulatory or corporate approvals in connection with the Offering and the Assignment, that there will be investor interest in future financings, market fundamentals will result in sustained precious metals demand and prices, the receipt of any necessary permits, licenses and regulatory approvals in connection with the future exploration and development of the Company's projects in a timely manner, the availability of financing on suitable terms for the exploration and development of the Company's projects and the Company's ability to comply with environmental, health and safety laws.

The Company cautions investors that any forward-looking statements by the Company are not guarantees of future results or performance, and that actual results may differ materially from those in forward-looking statements as a result of various factors, including, operating and technical difficulties in connection with mineral exploration and development activities, actual results of exploration activities, the estimation or realization of mineral reserves and mineral resources, the inability of the Company to obtain the necessary financing required to conduct its business and affairs, as currently contemplated, the inability to close the Offering, the inability of the Company to enter into definitive agreements in respect of the Letters of Intent which are the subject of the Assignment, the timing and amount of estimated future production, the costs of production, capital expenditures, the costs and timing of the development of new deposits, requirements for additional capital, future prices of precious metals, changes in general economic conditions, changes in the financial markets and in the demand and market price for commodities, lack of investor interest in future financings, accidents, labour disputes and other risks of the mining industry, delays in obtaining governmental approvals, permits or financing or in the completion of development or construction activities, changes in laws, regulations and policies affecting mining operations, title disputes, the inability of the Company to obtain any necessary permits, consents, approvals or authorizations, including by the Exchange, the timing and possible outcome of any pending litigation, environmental issues and liabilities, and risks related to joint venture operations, and other risks and uncertainties disclosed in the Company's latest interim Management's Discussion and Analysis and filed with certain securities commissions in Canada. All of the Company's Canadian public disclosure filings may be accessed via www.sedar.com and readers are urged to review these materials.

For inquiries or corrections to Press Releases, please reach out to Cision.
✕
× Close Ad