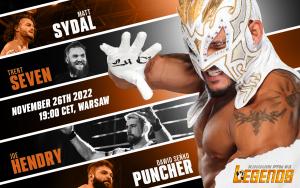 Kinguin Prime Time Wrestling ‘Legends’ promises to be enthralling and offers viewers a tantalising event full of exciting fights with a No DQ Match featuring Axel Fox vs. Justin Joy, a Last Man Standing Match with “Starboy” Nano Lopez vs. Sinister and the main event of Samuray Del Sol vs Matt Sydal.

To build up hype ahead of the event, on Friday, Kinguin Prime Time Wrestling ‘Legends’ contract signing ceremony takes place, during which the players will meet for the first time, sign the contract and start the face off which will be livestreamed to build up tension before the big day! You can find an exciting sneak peak of the gala with the upcoming trailer here.

The event will also feature commentary in both Polish and English, with Arek Paterek, Lukasz Balinski and Piotr Malecki with guest commentators Pawel Borkowski and Polish wrestler and silver Olympic medalist of 1980, Andrew Supron. English commentators include legend Santino Marella, who was both the fighter and commentator in previous Kinguin Prime Time Wrestling editions, and Lewis Costello, a popular stand-up comedian and commentator.

Robert Kalbarczyk, Chief Executive Officer at Kinguin said: “We’re delighted to co-organise Kinguin Prime Time Wrestling ‘Legends’ for the third time in its impressive history. Wrestling was perceived as a niche sport in recent years, but with such events we hope to bring it to life here in Europe. We can’t wait to give the audience and fans a rousing event!

The event will be live on Saturday, November 26 at 19:00 CET in Warsaw. Tickets can be bought here. The event will also be live streamed on DAZN, FITE, Wp.pl, YouTube, Twitch and more. You can find the full fight card below: